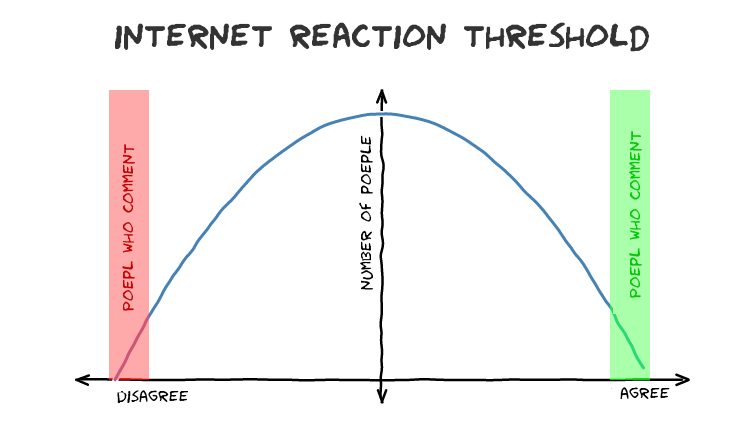 I've noticed a lot of the sites I hang out on are getting more an more vitriolic, there are lots of theories about why this is and I'd like to add the Internet Reaction Threshold to the mix.

Say someone posts a controversial video to YouTube. I like one by Matt Gray and Tom Scott where Tom presents the idea that lettuce is just used as a cheap filler vegetable as a wildly controversial view and the later in the video says "kids are basically small little tornados of destruction" as though it's just an accepted fact.

Let's go with the lettuce thing although if it helps you feel free to mentally replace "lettuce" with anything that's genuinely controversial, guns, abortion, systemd, politics, whatever.

Say someone posts a video about lettuce, 95% of the people watching will either agree or disagree but can't be bothered adding their comment. It takes a lot of effort to write "Sure, I prefer spinach, but lettuce is cheaper and easier to grow, I guess it's all down to what your willing to pay for, let's all get along." and if people don't care that much they just go off and watch the next cat video.

Only the people with really strong feelings will take the time to comment, and so the comment thread becomes polarised.

The Internet Reaction Threshold coupled with the fact that posts which get the most reactions are promoted creates a horrible feedback loop. People who post neutral feelings about lettuce don't get as much attention as those who are super-pro-lettuce or super-anti-lettuce.