I recently bought a Nokia 6.1 and I've been Loving it but it's running stock Android and one of the best ways to secure your Android device is to not install random apps that you don't trust, and especially not to install untrusted apps that didn't come from the Google Play store.

On my old Samsung Galaxy S4, I ran Lineage OS (previously CyanogenMod). On my Nexus 6P it was a mix, so on my Nokia 6.1, I tried to just use to Play Store for a while. However, I trust the F-Droid store and I wanted a couple of apps that are not in the Play Store so I installed it.

I'm not sure when Android made the change1 but now instead of having a single "Allow unknown apps" switch in the settings, there is one per App, so when I downloaded the F-Droid APK I was asked to allow Firefox to install unknown apps. 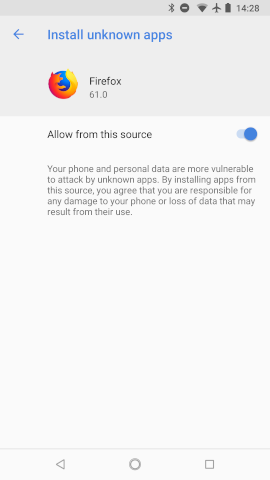 Then after that, I was asked to allow F-Droid to install untrusted apps. Once I'd allowed that I went back and removed the permission from Firefox:

The official Google Play store is filled with ad-supported apps and it provides almost no way to filter them, for example, I'd love a search function where you could restrict it to only Apps that don't have ads and don't push in-app purchases.

A classic example is when you search for "Flashlight" the top result that comes up contains both ads, and in-app purchases.

and on top of that, it requires access to:

That's a lot of permissions for something that's just going to switch the LED light on and off.

As a counterexample when you search "Flashlight" in the F-Droid the first result that comes up has no ads or in-app purchases and only needs camera2 and flashlight permissions which seems reasonable.

For a while I toyed with the idea of creating a web crawler and indexing the Play Store to create a site which provides advanced search of apps on the Play Store to filter out the junk but that seems like a lot of work to build and maintain for very little gain when the F-Droid store contains a great repository of nicely curated open source apps.